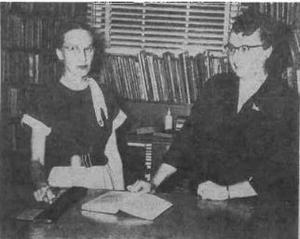 History of the Library

In 1845, an intellectually-minded cobbler in Renfrew, named William Dickson, who traveled from farm to farm and house to house eventually settled in a shop near the present Post Office. His shop gradually became a centre of discussions for towns people discussing their dreams, latest philosophy and varied topics. In 1852 Mr. Dickson, along with Mr. Archie Thompson and a lawyer, Mr. Elkanah Billings gathered up a few books and some money and formed the Renfrew Mechanics Institute and Library Association. After about 15 years, this original group has pretty well drifted away and the institute almost closed for several years.

In 1870 another group of book lovers came along and revitalized the library. Towards the end of the century the Institute gave away to a Public Library Board and the books were moved to the Barnet block, above what was then James Clark's drugstore, and later the Biway Store. Still later, application was made to the Carnegie Institute in the U.S. for assistance, and the existing building was erected in 1919 and 1920 at a cost of $19,315.00. Andrew Carnegie, a Scottish born U.S. Steelmaker left a good many of the millions he dug out of the U.S. earth to building libraries. Renfrew townsfolk were astute enough to furnish the library almost completely with the premium on U.S. dollars in Canada which ran as high as 17 percent. The decisions were made by a Library Board composed of the mayor, three town council members, three appointees from the Public School Board and three from the Separate School Board.

History of Our Children's Department

In 1959, the basement was completely renovated and a Children`s Library was established. The first Children's Librarian was Beatrice Gegg. Susan Klinck (picture on right) is the current Head of the Children's Department.  The department was renovated again in 2018 and included new flooring, shelving, paint colours and accessories.