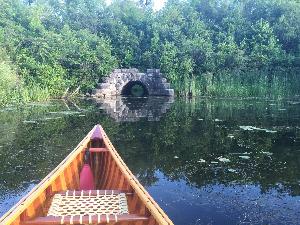 The story of Renfrew starts with the Bonnechere river. The first European settlers to this area followed the river from its mouth at the Ottawa, portaging the first chute easily and then finding the second chute more of a challenge. It took time to carry everything around the rapids and a small settlement began. The first settlers came in 1820 and began to clear the land. It is hard to believe today but, according to accounts at the time (W.E Smallfield, 1919) “Centre town then was what is known as an " ash swale," a low wet spot of good land, timbered by ash and oak. Where the High School now stands there were balsams and spruce.  On what is now known as "Thomson’s Hill," to the south of the town there was the finest hardwood grove in the neighbourhood : -beech, black birch and big maples. Along the river bank, the forest was mostly evergreen, red pine, spruce and cedar. “

In the early days Renfrew was called Horton and boasted three families: Joseph Brunette, Joseph Mayhew and Sgt. Thomas Airth. The census recorded 21 people. Supplies had to be brought from Perth, a long walk away. Perth was also the seat of municipal politics in the district of Bathhurst. Sgt. Airth was the village representative. The next few years saw many Scots immigrate to Canada and begin farming the land in and around Renfrew. Their heritage is reflected in the names of Glasgow, Lanark, Burnstown, Arnprior and Renfrew. French immigrants also arrived. One man Xavier Plaunt married the daughter of a Scot, Jeanette McLean. In 1835 most of the land that is now the town of Renfrew was farmed by three families, Xavier Plaunt, Peter Cameron and Antoine Beauchamp.

In 1840 the first store was opened by John Lorne McDougall who also went on to build the grist mill across the river which still stands as the McDougall Mill Museum today. Much of the land for the new village was owned by Xavier Plaunt and sold at cheap rates free for churches and public buildings. Plaunt’s red bricked, gabled house still stands at the end of Renfrew Avenue E. on Jennet St. As the village grew it became known as Renfrewville in the district of Horton. The town boasted a Blacksmiths, Tannery, Cobbler, Sawmill, Carriage Shop, Brewery, Post Office, Doctor’s Office, Axe Factory and Tailor.

It is hard to believe that there was no bridge across the Bonnechere in those days. If people needed to cross they would stand on the bank and yell. The Gibbons family who owned the farm at the crossing point would row over in a boat to ferry them across. The first bridge was built by loggers and shanty men as a punishment for drunken fights in town and to avoid being sent to the jail in Perth.

In 1850 the Honorable Francis Hinks, (later sir and prime minister of Upper Canada 1851 -1854) had his land surveyed north of the Bonnechere to be the site of the new county government with a public square, school and residential streets. His progressive policies of damming the chute, creating a plume and offering free water and cheap land led to a building boom of industry along the northern banks of the Bonnechere. John Lorne McDougall took up the offer and in 1855 bought the land for 5 shillings, and built a grist mill on the north bank of the Bonnechere. This saved locals the time and expense of taking their corn over the Ottawa River to the mill on the Lower Canada side, across from Castleford or overland to Perth. Hincks’ dream of being the county seat evaporated when Pembroke was chosen over Renfrew and Douglas, all of equal size at the time.

In 1895 a wire bridge across the river was built by public subscription with the town refusing to become involved! The “swinging bridge” is now a town landmark and far safer and more secure than the original plank and wire structure.

In 1855 the first agricultural exhibition was held making the Renfrew Fair one the oldest in Canada.

In 1858 the village of Renfrewville separated from Horton township and elected its first Reeve John Smith. The first municipal council meeting was held on August 30 1858 and “Let it Flourish” became the official motto. The first policemen/ firemen and street inspectors were hired: John O’Hara, John Coumbs and Orange Wright. The lock-up was two rented rooms in the Albion Hotel. Town status and a name change to Renfrew followed in 1895.

Lumber barons MJ O’Brien and JR Booth were both heavily involved in the building of the railways. O’Brien invested in the K&P and Booth in the Ottawa- Arnprior- Parry Sound Railway that went through Algonquin Park opening up the area along the upper Madawaska.

Renfrew’s Via Rail passenger service ended in 1990.The last railway line in Renfrew, the Canadian Pacific was torn up in 2011, with the last train passing through in August.

The era of the railway was at an end.

Roads in the early days were often muddied, pot-holed paths hacked through the forest. The original highways went through the towns until traffic congestion caused bypasses to be built around all the major towns. Highway 60 is the only major highway that still passes through the centre of town.

MJ O’Brien was to have a significant impact on our small town. He settled here from Montreal after meeting his wife in Calabogie. His vast fortune was made from the lumber industry followed by railways, munitions plants and hockey. He owned four of the six first National Hockey Association teams making him the father of, and Renfrew the birthplace of, the NHA/NHL. His mansion still stands at the north -eastern corner of Quarry and Barr. He built an opera house and movie theatre and owned significant tracts of land. Many Renfrew industries bore his name. His funeral in 1940 was one of the biggest events the town had ever seen.

The history of Renfrew is still visible in the buildings and facades of the town. The main street, Raglan is full of century old buildings and the side streets still have the homes that original residents would have known.

Renfrew has several claims to fame